For Prom it comes down to this: Bow Tie or Long Tie? 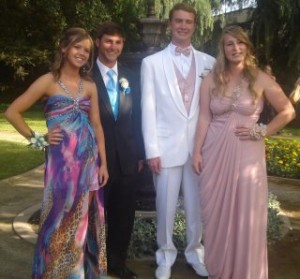 For those of you that are struggling with the question: “Should I wear Bow Tie
or Long Tie”?

Consider this…. Like the Black Tuxedo itself, the Bow Tie is still the King of men’s formalwear and it represents the style and elegance that quite frankly makes a Tuxedo. With that said however, an appropriate long tie is not a fashion mistake by any means as
it has its own look of elegance when worn properly with a Tuxedo.

Just to give you a little background, the tuxedo has changed very little in the past
90 years and except for the 1970’s and early 1980’s where the baby blue and
maroon polyester Tuxedos with ruffled shirts ruled the day, the traditional Bow
Tie was still the only tie available.

It wasn’t until about 10 years ago that the long Windsor Tie made its entrance onto the
formalwear scene and quickly became the tie of choice for most prom goers.
Reinforced by the Hollywood elite and the Tuxedos worn at the Oscars, the long
tie became the dominant tie in all aspects of formalwear and is now the number
one worn tie for Weddings Proms and other black tie events.

But, … not so fast.  Times are changing and for the past two years the Bow Tie is
making resurgence with roughly half of all Prom goers rethinking their tie
selection and ordering the classic bow tie that once defined formalwear for over 90
years.

As one of my customers said to me just the other day… “I have never worn a bow tie before… this year I want to Rock the Bow Tie”.

I have to admit that I like the new trend back to the classic bow tie, as I
believe a Tuxedo worn with a long tie tends to look less formal and more like
business attire, but that is just my opinion.

There are still a lot of arguments in support of wearing a long tie as most young men
that want to avoid standing out or worse yet looking goofy in front of their
peers and their dates.

Whatever style you pick, the bottom line is that you should choose the style of tie based what is comfortable and appropriate for you.  After all you are the one wearing the Tuxedo.