2010 Business Woman of the Year 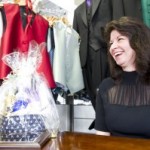 2010 Business Woman of the Year

Colleen Lawrence, co-owner of Tuxedos of Lodi on School Street, knows every customer who walks through her door is preparing for a milestone they will remember forever.

Whether it’s a wedding or prom, charity auction or art showing, it’s her job to ensure they look their best when it happens. While she has a sharp sense of humor and is always ready to flash a genuine smile she’s also very serious about her responsibilities.

Lawrence, named “Business Woman of the Year” by the Lodi News-Sentinel for 2010, said it’s crucial for her clients to know that she is there for them and dedicated to making them look as sharp as possible. She was nominated by Peter Westbrook, her fiance and the shop’s co-owner. Candidates are nominated by people in the community and then voters cast their ballots for the winner on the Sentinel’s website. Westbrook said his faith and trust in Lawrence led him to nominate her for the award.

Tuxedos of Lodi Best of Lodi for 18 Years Running

“This woman is a rock and a natural; she doesn’t let anything faze her,” he said. “She makes decisions based on good common sense and doesn’t overreact to anything.”

When Westbrook and Lawrence purchased the shop from Westbrook’s uncle in 2007, the business and its reputation were firmly cemented. Lawrence’s dedication and diligence were crucial in maintaining it, Westbrook said.

About a year after the two started running the business, Men’s Wearhouse purchased Jeffrey Morton, the distributor that had been the store’s largest supplier.

Finding a new supplier was a juggling act for Lawrence, Westbrook said.

“Colleen had to figure it out, still make money and keep prices where we could still attract business,” he said.

The duo settled on Selix as their main supplier and Jim’s Formal Wear as their backup. Lawrence decided to have two suppliers because she wanted to avoid a similar stressful situation in the future, she said. The flexibility allows the business to offer its customers a diverse selection of merchandise at a variety of prices.

Stress is something that’s part of the business, but Lawrence’s gentle demeanor and attention to detail help prevent the preparation of a special event from devolving into a frustrating experience.

When a customer is concerned about problems they’ve experienced at other shops or locating a hard-to-find size or color, Lawrence is there to smooth the wrinkles.

“I always tell them that’s my problem, not yours,” she said.

To get inspiration and predict trends in the fashion industry, Lawrence constantly reads wedding magazines to get ideas on what to order for the store. The most fashionable colors for formal wears right now appear to be deep purples, dark teal and midnight blue, she said.

Working with the teenagers coming in for formal dances is something she relishes, Lawrence said.

She has a tried and true method to keep teenage boys from sagging their pants: Dress them in a tuxedo.

Unlike traditional pants found on the racks in department stores, tuxedo pants have a higher waist and must be worn higher than most teens are comfortable with. If you sag with tuxedo pants, they will bunch around the ankles and waist, she said.

“They all say they feel like their grandpa when I pull them up,” she said.

She lets them compare the look of how they wear it with how the pants should be worn and it always comes back with the teens siding with her judgment.

“This is where they learn how to wear a formal garment,” she said.

Her and Westbrook’s methods received a ringing endorsement in an issue of Lodi High School’s now-defunct newspaper, the Flame. Tuxedos of Lodi was specifically mentioned in an article about the 10 things to do to get ready for prom. While the story talked about making appointments for salon visits and dinner reservations, Tuxedos of Lodi was the only business mentioned by name in the article.

Prior to purchasing Tuxedos of Lodi, Lawrence and Westbrook were working together at Shared Network Services for several years. When they heard Westbrook’s uncle, Michael Lapenta, was selling the business, they decided to go in together on the venture.

The Lockeford resident had no previous experience in the garment industry, but was a quick study. Lapenta was a phenomenal instructor and guide, she said.

“He taught us everything he knew and made sure we did it his way,” she said.

Lawrence lends a feminine touch to the process and the male customers like the feedback she offers, Westbook said.

“It plays in a lot with weddings,” she said. “I tell them he’s there to accessorize her. His only goal is that at the end of the day they are married.”

The men are receptive to the input, help and guidance she provides, Westbrook said.

“They get that it’s not just the girl saying it, they’ve got somebody else — a professional — saying it,” he said.

Ray Crow, membership director for the Lodi Chamber of Commerce, said he just pointed his nephew towards Tuxedos of Lodi because he is getting ready for his first date and formal dance and needs to dress properly.

“It’s a place everybody goes,” he said. “They have the best service and really good people.”

Although weddings happen all the time and those keep her busy, Lawrence has her eyes on the calendar and is counting the days until the Pigskin formal on Nov. 13. She knows in the days leading up to it will see her measuring, consulting and continuing to do the work that makes her respected in the community.